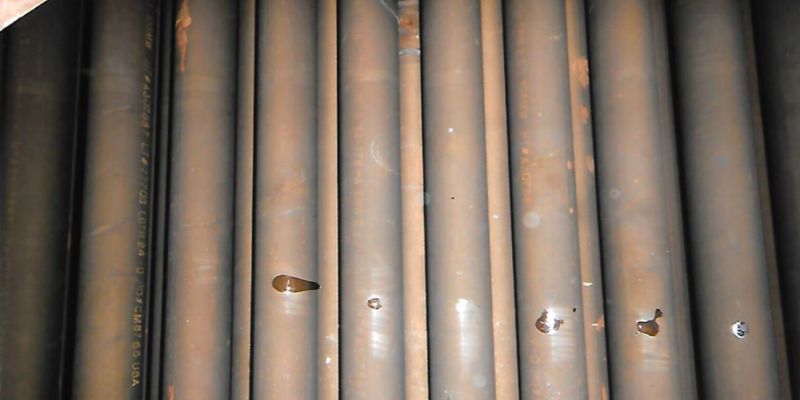 The law requires that boilers and other pressure vessels be routinely inspected, as we discussed in a recent article.

Another valuable method of testing boiler tubes is called Eddy Current Testing (ECT). It can be performed on boiler tubes, just like it is done on chiller tubes.

What Is Eddy Current Testing (ECT)?

You are probably familiar with Eddy Current Testing. It been used to check condenser and evaporator tube for years. Eddy Current testing is a type of NDT (nondestructive testing) which will evaluate the condition of specific materials without harming them. It works only on materials which conduct electricity.

To help you understand how Eddy Current testing works, according to nde-ed.org:

Eddy currents are created through a process called electromagnetic induction. When alternating current is applied to the conductor, such as copper wire, a magnetic field develops in and around the conductor. This magnetic field expands as the alternating current rises to maximum and collapses as the current is reduced to zero. If another electrical conductor is brought into the proximity to this changing magnetic field, current will be induced in this second conductor. Eddy currents are induced electrical currents that flow in a circular path. They get their name from Eddies that are formed when a liquid or gas flows in a circular path around obstacles when conditions are right.

ECT has been used for many years in chillers to determine the condition of the tubes. Every 3-5 years, an expert runs an electromagnetic induction probe through each tube. They are looking for flaws. Imperfections can be detected on both the inside and outside of the tubes.

This same technology is now being used to determine the condition of boiler tubes. If a boiler has one tube fail, ECT can help determine if there is just one bad tube or if the entire boiler tube bundle is at risk.

ECT is very useful for testing the condition of boilers because it can identify pits, general corrosion or wear on the heat exchanger tubes, thereby giving operators ample warning to take appropriate action before failure interrupts operations.

If proper treatment of a boiler has lapsed, there may be unseen damage. ECT is an additional way to evaluate any damage that may have occurred. Like in a chiller, a trained technician can check tubes one at a time and compile a report identifying the condition of the tubes.

We always consider the boiler inspection to be an annual report card on the condition of the boiler. Is the program protecting the boiler? Are there any issues which need to be addressed? If there was a problem before Chemtex took over, is the issue getting better? Is a small problem indicative of a much larger one?

Regular testing and inspections are critical to a long-lasting, well-functioning boiler. Knowing that Eddy Current Testing can be employed with a boiler as well as with a chiller is relatively new. The company that provides ECT on boilers is not necessarily the same one that runs tests on chillers. If you think ECT would be beneficial to your facility and live in Arizona, Nevada or Southern California, we can help! If you live outside of these areas, ask your Chemtex rep for the name of a company who can!

Keep up on your program and you won’t have any unpleasant, costly or dangerous surprises.

Questions? Feel free to contact us. We’d be happy to help you answer any questions you have regarding Eddy Current Testing for your boiler inspection.