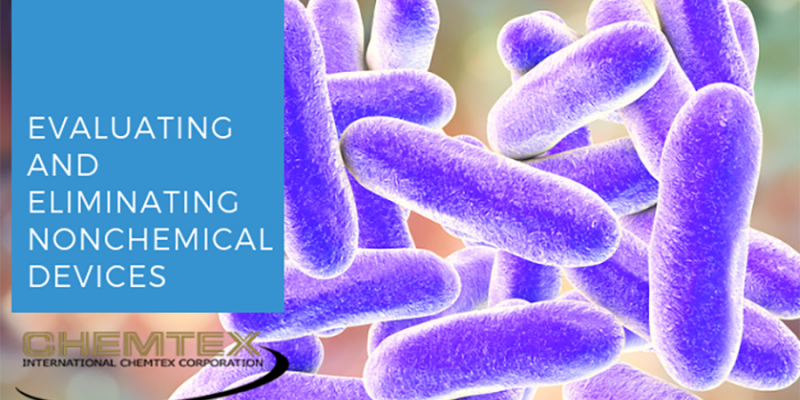 Chemicals are a big part of water treatment. Unfortunately they often get a bad rap.

We get it. Chemical overuse is an environmental hazard and chemical exposure is a health risk, so it’s no surprise people are seeking ways to reduce dependence on chemicals. One of the ways we see is the adoption of Nonchemical Devices (NCDs).

However, sometimes the hazards associated with NOT using chemicals are greater than the hazards of using them. We find that’s the case in the world of water treatment, especially when Legionella is a factor.

The short story is: All of these examples have been studied extensively. The results have been mixed but mainly unsatisfactory, especially when studied by non-partisan researchers.

However, these claims do not hold up over an extended time period. There is little to no credible research demonstrating that these devices will control dangerous microbiological growth over a long period of time. This is a serious issue: microbiological growth not only interferes with operations, it can cause severe health hazards such as legionnaire’s disease.

While positive reviews of NCDs are out there, closer examination and follow-up indicate that results diminish over time. It’s typical to learn that individuals who made such claims have moved on, and locations that housed these devices no longer use them.

Consider an academic study from University of Pittsburgh (2011) titled Biological control in cooling water systems using nonchemical treatment device, the abstract of which concludes “the results of this study conducted under well-controlled conditions indicate that NCDs did not control biological growth under the test conditions in the pilot-scale cooling tower systems.”

When a plant is relying on a nonchemical device, it must take responsibility for ongoing testing and evaluation very seriously, at a greater frequency and level of detail than when relying on a traditional chemical program.

Evaluation should include recording data on scale, corrosion and microbiological activity, both before and after installation of device. These figures must be evaluated regularly. Because numerous studies have shown that these devices tend to fail after an initial successful start-up phase, it’s essential to actually increase the schedule of testing after initial launch of the device.

Tempted to try NCDs? Please research the topic thoroughly before adopting nonchemical devices, especially in areas or facilities where microbiological growth issues could present an elevated risk to people.

The risk of Legionella was a huge motivator for today’s strict laws governing water treatment. Failure to comply presents a risk to business operations as well as to people who might be exposed to disease.

Review the tools you are using and make certain you are employing the best tools for the job. Chemtex is always here to help you answer any questions.